Learn What is Blockchain and How does it work?

Home/Artificial Intelligence/Learn What is Blockchain and How does it work?

You could have heard the term blockchain it’s been making noise for even as across the big technology giants. Each technology geek is looking to understand it and how it may help to grow their tech enterprise.

So plenty of tech men who apprehend it well have defined it with exclusive analogies with trying to carry the technical angle to it. There are a whole lot of questions people searching out related to blockchain like ‘what’s the blockchain concept?, what’s blockchain technology?  How does blockchain work? and what’s blockchain used for and so on?. So I’ve determined to summarise these types of questions in this article and assist you to understand the fundamentals of it.

There are plenty of phrases which can be related to it together with Bitcoin, Mining, Double Spending, Hashcash, Nodes, Cryptocurrency and so on. Those are the buzzwords associated with the blockchain. You may investigate these terms after you apprehend the core concept of the Blockchain.

Let’s begin with the simple question likely the vital one.

What is Blockchain concept?

“A blockchain, originally blockchain, is a growing list of records, called blocks, which are linked using cryptography. Each block contains a cryptographic hash of the previous block, a timestamp, and transaction data (generally represented as a Merkle tree root hash)”

I know this is a bit overwhelming and in fact, this statement summarises most part of blockchain in a technical manner. Now we are going to try to understand it in a general manner.

Let’s start with the origin first,

The idea of blockchain was given by Satoshi Nakamoto, the same person/group who invented bitcoin in 2008 to serve as a transaction ledger of the cryptocurrency ‘Bitcoin’. The invention of the bitcoin made it the first digital currency to solve the double spending problem without the need for a depended on authority or significant central server.

Certainly, the person/group who created bitcoin stays a mystery until now. Since then, the identity of the person who invented blockchain technology has been subject to speculation. Numerous people suspected to be the Nakamoto have denied the claim.

Allow me to take you to the backlight of the internet. In 1977 the internet was just simply a couple of computers and dozens of dots which are loosely connected that barely can deliver plenty of bits and bytes in them. And today after 40 years you are reading this article or you can watch videos from anywhere at any place in your cellular phone without the wire connected to the device. The blockchain is far as essential and parallel to the internet. It is not like use case of the internet. it is very complex to apprehend technically.

The blockchain is a series of blocks that comprise information. Blockchain is a distributed ledger (a book or other collection of financial accounts) that is completely open to anyone.

Once the data has been recorded into the block then its very tough to trade/change it. Now recognize ledger, while you purchase things that have labeled their company name, what makes you so sure of it that it’s from the same origin. To make certain of any of those questions you need a system where fax may be recorded anywhere and security is guaranteed that way no one can cheat the machine by enhancing record.

Another good example through which we can understand it, our present-day money transfer system. Everything that you own including money is nothing but the entries on a ledger. Consider if you send money from India to a friend in the USA. It’s not that cash flies from right here to there. It’s truly one entry that happens in my ledger and some other parallel entry that occurs for your buddy’s ledger. But the problem, however, is between you and your friend ledger there is a group of various ledgers. Those bunch of ledgers owns by banks, cash transferring institution, economic group, Regulators, insurance businesses and other monetary groups. And at some stage in this money shifting process, each of these ledgers must be reconciled. Because of so many intermediaries, it creates friction and as an end result, it creates time delay and it impacts charges.

Every block added immutably links to each previous block. If a hacker comes in and attempts to trade the transaction she or he has to change every block of a sequence. Consequently, outstanding safety is the main advantage here.

So again in simple technical term Blockchain serves as a bookkeeping platform or a ledger that is incorruptible, enforces transparency, and bypasses censorship.

How does Blockchain work? 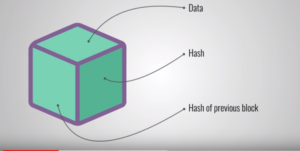 Once a data has been recorded in the blockchain it becomes very difficult to change it. Let’s take a closure look at the block.Each block contain data, hash of data and hash of previous block. The data that is stored in the block it relies upon the type of blockchain. The bitcoin blockchain, as an example, stores the details of transactions such as sender, receiver and quantity of coin info. A block also has a hash, you can compare a hash to a fingerprint, it identifies a block and all of its content. It is always unique just as a fingerprint.

Once a block is been created its hash has been calculated. Changing something inside the block will cause the hash to change. In other words, hashes are very useful when you want to detect changes to the block.

The third element inside each block is the hash of the previous block. This effectively creates a chain of blocks and it’s this technique that makes a blockchain secure. Tampering with the one block can affect the whole blockchain. The first block in the blockchain, we called it a genesis block.

Now let’s consider that someone tampers with the second block. This causes the hash of the block to change as well. In turn that will make block 3 and all following blocks invalid because they no longer store a valid hash of the previous block.

So to mitigate this, blockchains have something called proof-of-work. It’s a mechanism that slows down the creation of new blocks. This mechanism makes it very hard to tamper with the blocks because if you tamper with 1 block, you’ll need to recalculate the proof-of-work for all the following blocks.

Blockchain technology may be included in multiple regions like cryptocurrencies, Bitcoin, smart contracts, Banks and lots of other domestic and financial uses. The primary use of blockchains today is as a distributed ledger for cryptocurrencies, most notably Bitcoin.  There are a few operational products maturing from proof of concept by late 2016.

Companies large and small in many different sectors are exploring the potential of blockchain technology for an extraordinarily broad range of application, viewing it as a technology with the potential to speed all manner of transactions, increase efficiency and track and manage process and assets. Some of the major applications are

Blockchain technology offers a fast and secure opportunity to manage the company’s payroll, that is, in particular, beneficial for international business that works with employees around the globe and which are making blockchain companies.

Blockchain has the capability not only to enhance the security of cloud storage but also to take your data from the hands of large corporations. Blockchain allows individuals and businesses to essentially rent a backup hard drive or server capacity for which other users who want extra storage than they very own can pay for the use of.

Banks are presently the primary fundamental corporations trying to transition into the blockchain, and with companies like R3 completing proofs-of-concept with eleven banks.

Blockchain will completely change the way we think about banks, the technology will truly augment on the prevailing infrastructure of banks. The key features to mention right here that blockchain can transform are

A few different enterprise boom and application which could show up with blockchain are listed below.

A lot of those programs are in improvement.

The blockchain enterprise is ever-growing. This new technology might also seem horrifying at first, but the premises on which it stands make it a proper technology to implement.

Considerning development point of view of blockchain, there are several programming language that can help you create applications for blockchain. You can use any of the tranditional core languages like C++, Java or Python and others like Simplicity and Solidity- these are new and more specific to Blockchain.

Blockchain suffers from “technological infancy” which can make investors hesitant at first, but that doesn’t make it any less effective than it’s far.

The technology is open-source, making it be had for every person and anyone.

Stick your nose in the industry, you might discover uses for it, or create your own use for it; the possibilities look limitless.